I’ve wanted a house. I’ve wanted it even when I tried to talk myself out of wanting it. With me at all times was this low ache, humming somewhere in the vicinity of my heart. Heavenly visions would come to me of hosting candlelight gatherings, cooking elaborate meals, offering friends and family a tranquil space to rest, cooking breakfast for my daughters during their frequent visits, having a normal-size real Christmas tree, and spending cozy evenings at home sipping fine Scotch with my partner Shal wrapped in the amber glow of a crackling wood stove. This oh so visceral want originated in a deep and primal place inside me. I even went so far as to employ the Law of Attraction by setting my email password to “ILOVEMYHOME.”

Practical visions floated in and out of my psyche as well. Having everything we own under one roof, rather than scattered in various storage facilities. A garage to store our motorcycles, mountain bikes, skis, and accompanying gear – and gasp! maybe even the car. I’ve owned houses in the past, so I’m aware of the potential for abundant challenges. Whatever. I forced myself to ignore comments from well-meaning folks – aka the Bubble Bursters – who tried to talk me out moving my money from a historically well-performing investment account into four walls, a roof, and a floor. And of course, there was plenty of advice that justified moving my money from the volatile markets into a house in a local real estate market that was projected to experience healthy growth. This was not a decision I took lightly, and in the end, I had to remind myself that since I had enough money to buy a house, that the decision was not about the money…it’s not about the money…it is NOT about the money.

Over the course of the past year, Shal and I would sporadically commit to house hunting. We’d go out with a realtor, get discouraged, get busy with other things, and table the house search for a few months. Wash, rinse, repeat. Nonetheless, for that entire year, and as I’ve mentioned in other blog posts, I’d actually visualize living in every single house with a For Sale sign that might have been remotely in our price range. I’m not exaggerating, and it was frickin’ annoying.

And given the usual disparity between our budget and our tastes, the dim prospect of finding our dream home often left me deflated. As many of you know, house hunting can be an emotionally wacked experience. I’d see a listing online that looked like “The One,” my hopes would get up, then BAM! In person the house sucked, or it was in a terrible location – “Gee, the photos didn’t show the nuclear power plant next door.” OK, I’m exaggerating on that – but it might as well have been a nuclear power plant in some instances. I felt fear. Fear that I’d never get a house. I feared that I’d spend the rest of my life in a state of longing – or worse, perpetual house hunting.

Shocking as it may sound, the novelty of living in a 5th wheel trailer eventually wore off for me. It was fun and unique at first as I felt like we were continuing the 15th month adventure we just came off. We could continue to live simply, and inexpensively on a 40+ acre piece of property down a dirt road. In many ways it was perfect. Inexpensive rent kept us financially comfortable; the neighbors were friendly and helpful; we could ride our dirt bikes, or snowshoe, into the forest directly from the property, and the wildlife visitors were a charming add on.

In many ways it was not perfect. I was never able to make peace with the monstrous high-voltage power lines running through the property consuming what could have been an idyllic view. I considered changing my email password to “ILOVETHEFUCKINGHIGHVOLTAGEPOWERLINES666!” to see if I could actually ‘love what is.’ But you know what? I didn’t want to love them – not really. They’re ugly and stupid, and the crackling and buzzing creeped me out.

And then, one early autumn day, we were served an “eviction” notice by text message. The property owner gave us just two weeks to remove ourselves and 42’ 5th wheel off the property. Our immediate response was panic, you can’t park this rig just anyway; and anger for what felt like irrational and unfair aggression towards us. Of course this so-called eviction was illegal but we had no interest in fighting it because we knew we would be much happier to move on and away. We reminded ourselves that there’d be a silver lining if we could muster the patience, and keep our resolve to look ahead by not dwelling on feeling victimized. For the following two weeks we fluctuated between the stress of not knowing where we were going to live/park a 42’ 5th wheel, and laughing at the absurdity of what had just transpired.

And what a silver lining it was! After a random few weeks at the local golf course’s RV park we found our house. A house with good bones, delightful view, 3-minute walk to town, charming backyard, garage, and potential to put our stamp on it without having to spend, as Shal would say – a “shit-ton” of money. We submitted a solid offer, the seller accepted, and thanks to our adept realtors the closing occurred with ease. The inspection didn’t uncover anything major, and all the signs were showing us it was meant to be.

We’ve been living in the house for nearly two months now – and those dreamy visions are materializing – all but the woodstove. We’re creating the aforementioned glow in other ways. Wink wink. And it just keeps getting better and better – like the fact that there are awesome mountain-biking trails literally 100 feet from our house, the new neighbors are friendly and welcoming, and the town hosts interesting and meaningful events. We’ve hosted friends and family, cooked elaborate meals, and were even able to accommodate a friend stranded when the Pass closed down due to snow. We’re making friends in our little town of 950 with folks of common interests. Shal, using her organizational stacking magic as a former Costco employee, is in the process of creating a shelving wonderland in the gear room to organize all our adventure gear. Bu-bye Want. 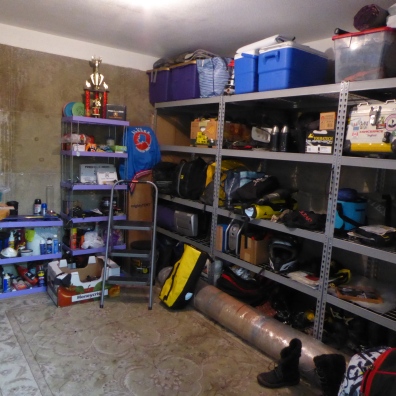 Car will fit one day.

Owning a home leaves me feeling grounded in place and rooted. The physical and emotional structure will serve as a veritable launch and landing pad for our next travel adventure. Having lived a temporary, nomadic-ish lifestyle for the past 4 years – including over 100 nights sleeping in a tent, and 350 nights sleeping in a 5th wheel – there’s something that feels substantial about sleeping in the house I own day after day. Knowing that I honored the truth of what I deeply wanted, and stubbornly going after it, is like giving myself an affectionate lingering hug every time I walk through the front door.